The simple answer is: Pharma is a trillion dollar industry that uses their enormous power and profits (that are made on the backs of very serious & chronically ill patients) to buy loyal support and kill their opposition with the aid and assistance of lawmakers and regulators.

Who else is affected by the collateral damage from the US having the highest drug costs in the world? The answer is the vast majority of people including the primary payers of insurance such as public and private employers and employees (who are burdened with high drug costs via insurance premiums, co-pays, and deductibles); federal, state and local governments that pay for drugs via Medicaid, Medicare, VA, and federal, state and local: hospitals, nursing homes, schools, jails and prisons.

Who pays the most for the high cost of drugs? ….Everyone who pays local, state and federal taxes.

While pharma companies receive the biggest financial reward for their lucrative business model, there are other groups that also receive significant benefits from the high cost of drugs. These include insurance companies, their executives, and employees, Pharmacy Benefit Management (PBM) companies, who make money from deals arranged for insurance companies with pharmaceutical companies and pharmacies, hospitals that receive high profit margins on drugs that they administer, and the advertising and media industry that sells non-stop ads that bombards consumers with TV, radio and print drugs ads every 24 hours. In 2015, pharma spent a record $5.4 billion on direct advertising to consumers, primarily through television.

Big Pharma tries to justify the high cost of new drugs due to the high cost of research and development. However, their claims are not supported by the facts. Big Pharma spends 170% more on marketing and sales of their drugs than research and development. Secondly, the same drugs that are available throughout the world, cost up to 300% more in the US. Why….because elected federal and state officials have sold out the American people to Big Pharma. Politicians accept millions of dollars in drug money and in exchange, let Big Pharma do whatever they want without any ethical or moral boundaries.

A number of well-documented articles in Kaiser Health News and other sources have described some of the very effective strategies that Big Pharma and their $270 million trade organization (PhRMA) use to buy loyal support from US elected officials, healthcare practitioners, and patient groups. 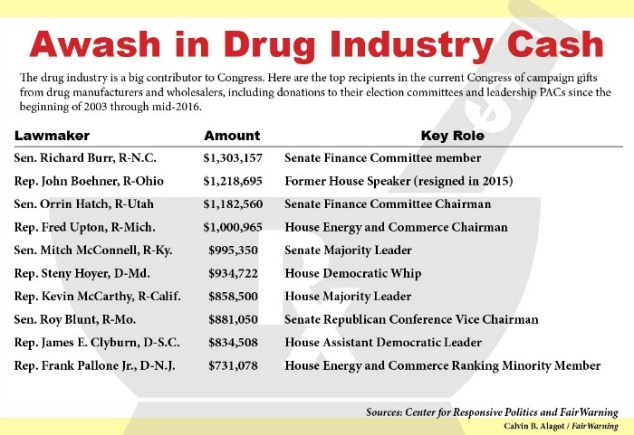 Trump’s Commitment to Drain the Swamp and Lower Drug Prices

Although Republican presidential candidate Donald Trump has boasted that he could save $300 billion in lowering drug costs, two years later, Trump has not taken any executive or legislative action to lower the costs of prescription drugs that continues to personally bankrupt many Americans and substantially adds to the accumulated debt of states and the federal government.

However, in his State of the Union speech on January 30, 2018, Trump once again stated that he will dramatically lower the high cost of prescription drugs for the American people under the leadership of newly appointed Alex Azar, Secretary of the US Department of Health and Human Services. 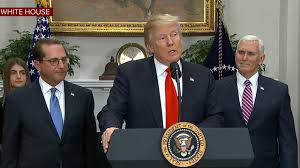 It should be noted that Mr. Azar is very familiar with Big Pharma and the high cost of prescription drugs. Mr. Azar has served on the board of Biotechnology Innovation Organization, a pharma lobby and was the hired by Eli Lilly as its top lobbyist in 2007. Azar continued to advance within Lilly and in 2012, became President of Lilly USA.

During Azar’s tenure at Lilly, their drug prices rose substantially, especially for insulin which is necessary to sustain life. Insulin was discovered, as a life-sustaining treatment of Type 1 diabetes, by two Canadian research physicians who were awarded a Noble Peace Prize over 90 years ago. Ninety years later, the US consumer cost and drug company profits derived from insulin in the continues to rise dramatically, while millions of people with diabetes, in the world, needlessly suffer and die as a result of not having access to affordable insulin.

In 2009, Lilly pleaded guilty and paid a record settlement of $1.4 billion for criminal and civil charges for marketing the unapproved uses of Zyprexa, a powerful antipsychotic Lilly drug. Zyprexa was heavily marketed by Lilly during the period of 1999-2003 to seniors and their families, nursing homes and healthcare professionals for the treatment of Alzheimer’s and other symptoms. However, Lilly never requested nor received the required FDA approvals for these expanded uses.

So, time will tell how committed and effective Trump and Azar in actually lowering the cost of prescription drugs to tens of millions of Americans. We are in the second year of Trump’s term and waiting to see if his actions will match his words.